MINUTES OF THE MEETING WITH THE STAFF SIDE DT 20.9.2016 BY THE CPMG,TN ON CADRE RESTRUCTURING 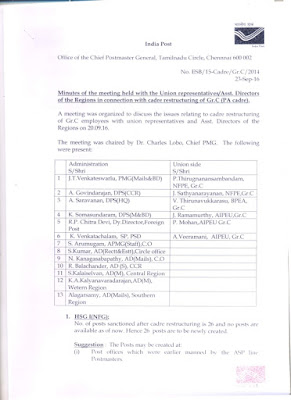 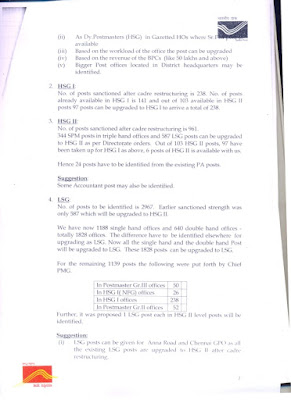 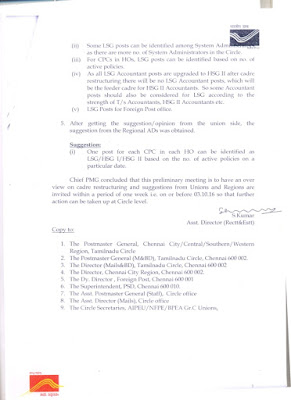 7th Pay Commission Issue - 15 Crore Workers will be on Strike

The Joint platform of Central Trade Unions (CTUs) of the Country along with Independent National Federations of employees of different industries and services including Confederation of Central Govt. Employees and Workers, have decided to organize All India General Strike on 2nd September 2016, against the anti-people, anti-workers policies and authoritarian attitude of the NDA Government

1.     7th Pay Commission issue : Avoid delay in implementing the assurances given by Group of Ministers to NJCA on 30th June 2016, especially increase in minimum pay a fitment formula. Implement the assurance in a time bound manner.

2.     Settle issues raised by the NJCA, regarding modifications of the 7th Pay Commission recommendations, submitted to Cabinet Secretary on 10th December 2015.

Central Govt. Employees worst affected:
The policy offensives of the Govt. like downsizing, outsourcing, contractorisation, corporatization and privatization has affected the Central Govt. departments and employees in a worst manner. Ban on creation of new posts and non-filling up of about six lakhs vacant posts had increased the work load of the existing employees and adversely affected the efficiency of the services. The New Pension Scheme (NPS) implemented with affect from 01.01.2004, is nothing but a “No Pension Scheme”, as it is fully dependent on the vagaries of share market forces. The Govt. is not ready to grant civil servant status to Gramin Dak Sevaks and to regularize the services of causal, contingent and contract workers. The 5% ceiling on compassionate appointment is not yet removed. The bonus ceiling enhancement from Rs.3500/- to Rs. 7000/- is not made applicable to Central Govt. Employees. Govt. is not ready to modify the 7th CPC recommendations, which is worst ever made by any pay commissions. The assurance given to the staff side regarding enhancement minimum pay and fitment formula is yet to be implemented. All other retrograde recommendations like reduction in the percentage of HRA, abolition of 52 allowances etc. are yet to be modified. Overall the attitude of the Modi Govt. is totally negative towards the Central Govt. employees and pensioners.

The National Secretariat is of the firm opinion that unless the policy of the Govt. is changed, more attacks are likely to come on the Central Govt. employees and working class. To change the policy the united struggle of entire working class is required. It is in this background the Confederation of Central Govt. employees and workers has decided to join the General Strike along with other sections of the working class of our country.

3.     Strict enforcement of all basic labour laws without any exception or exemption and stringent punitive measures for violation of labour laws.

5.     Minimum wage of not less than 18000/- per month with provisions of indexation (for unskilled worker).

6.     Assured enhanced pension not less than 3000 p.m for the entire working population (including unorganized sector workers).

8.     Stoppage of contractorisation in permanent/perennial work and payment of same wage and benefits for contract workers as that of regular workers for the same and similar work.

9.     Removal of all ceilings on payment and eligibility of bonus, provident fund and increase in quantum of gratuity.

10.Compulsory registration of trade unions within a period of 45 days from the date of submitting application and immediate ratification of ILO conventions C-87 and C-98.

11.No FDI in Railways, Defence and other strategic sectors.

12.No unilateral amendment to labour laws.

Demand of the Central Govt. Employees

1.     Avoid delay in implementing the assurances given by Group of Ministers to NJCA on 30th June 2016, especially increase in minimum pay a fitment formula. Implement the assurance in a time bound manner.

2.     Settle issues raised by the NJCA, regarding modifications of the 7th CPC recommendations, submitted to Cabinet Secretary on 10th December 2015.

5.     (i) Treat Gramin Dak Sevaks as Civil Servants and extend all benefits on pay, pension and allownaces of departmental employees.

6.     Fill up all vacant posts by special recruitment. Lift ban on creation of new posts.

8.     Extend benefit of Bonus Act amendment 2015 on enhancement of payment ceiling to the Adhoc bonus/PLB of Central Govt. employees with effect from the financial years 2014-15. Ensure payment of revised bonus before Pooja holidays.

As per press release of Trade Unions, Over 15 crore workers in several States would take part in the strike demanding higher minimum wages and provision of social security to unorganised workers.

The unorganised workers too demand the minimum wages to be atleast Rs.18000 as against what they get now.

Not lagging behind, Employees of PSUs have listed Rs. 18,000 minimum monthly salary as one of their demands for which they are all set to strike work on September 2.

The unions said a bandh-like situation would prevail in 10 States and a “chakka jam” in others.

“The workers will also take out a protest from Kranti Chowk to register their demands seeking parity with the government staff who got benefits of 7th pay commission,” said Devidias Kirtishahi, general secretary of the Marathwada Labour Union that would lead the morcha.

“The central government is all out to support industrialists and capitalists by making changes in the labour laws to protect their interests. The laws that once protected the rights of the workers are being changed. If this allowed to be continued, the workers would have no voice and would have to live their lives like slaves,” he added.

“All government scheme workers will take to the streets. It will be bigger than last year’s strike and we expect over 15 crore workers to participate. It will be a befitting reply to the government,” Amarjeet Kaur, national secretary, All India Trade Union Congress, said at a press conference jointly organised by the 10 unions.

The Bharatiya Mazdoor Sangh has opted out of the strike against 7th pay commission, but the striking unions said it would have no impact on the strike. “The strike will be complete in industrial sectors such as transport, finance, power, coal, textile, automobile, port and dock, steel, oil, defence production, scheme and education,” a joint statement said.

“BMS leaders may not be supporting us because of political compulsions, but their workers will still join the strike,” Tapan Sen, general secretary, Centre of Indian Trade Unions, said. He said the strike would not affect emergency services of hospitals and clinics. Banking transactions may be affected as bank unions have also issued strike notices.

Source: Confederation   The Hindu
Posted by GPO_NFPE at 11:04 No comments: 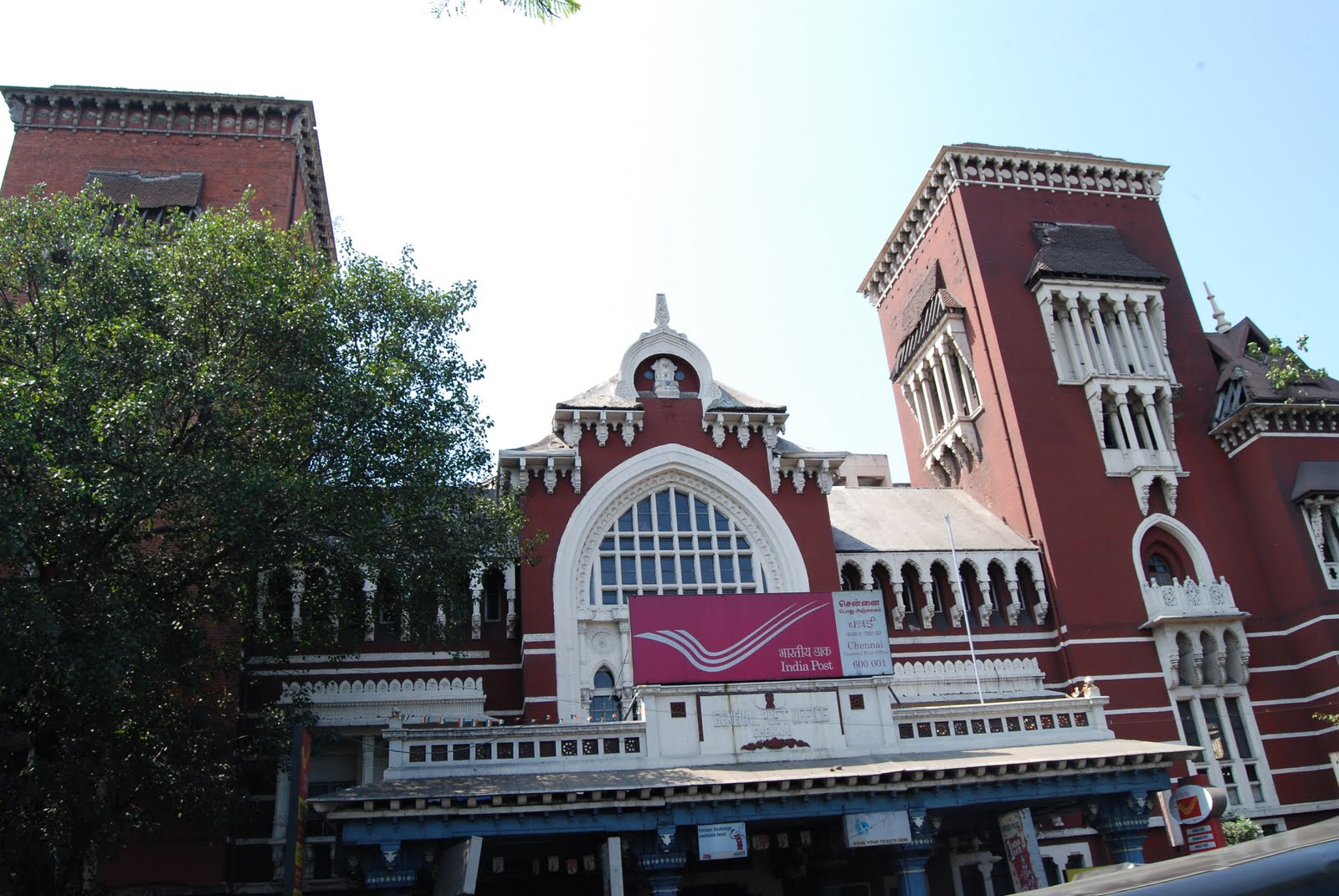