The postal department is among 26 applicants that sought banking licences from RBI on 1 July. 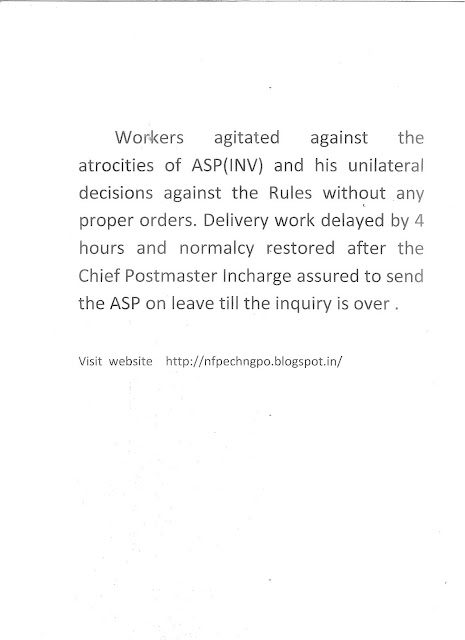 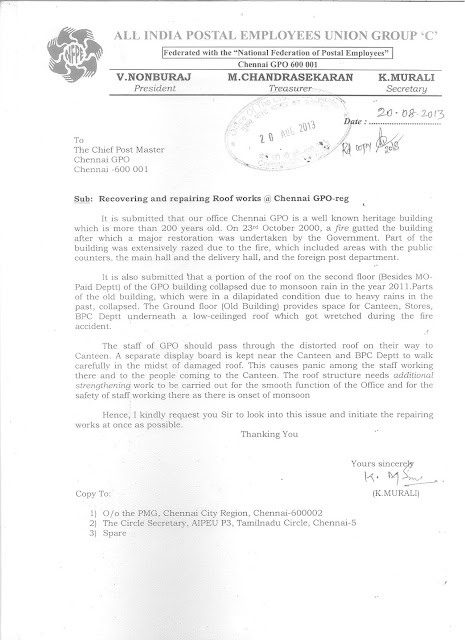 It was instructed that the existing two batch system (Registered, MO (I): 43, Speedmen (I, II): 15) existing at Chennai GPO for delivery of Accountable and Un-Accountable articles should be clubbed together and it should be made two batch system (Registered, MO, Speedmen (I): 56, Speedmen (II): 11) w.e.f 14.08.2013.
Entire Postmen Staff of Chennai GPO stopped working, protesting the intervention and massive protest demonstration took place in front of Chennai GPO on 14.08.2013. Circle President, AIPEU P3, J.SriVenkatesh presided over the strike on the first day. All the Postmen staff went onto third day strike on 16.08.2013 (since 15th is a holiday). Talks were held @ CPMG’ Office, CCR on 16.08.2013 by the Union leaders but Officers continued to negotiate only. On the next day (i.e. 17.08.2013), AIPEU P4 staff decided to step down a bit and decided to agree for the modified two batch system if few beats are included in both the batches which was proposed to be 60 beats for 1st delivery and 10 beats for 2nd delivery. Talks were held between the PMG, CCR and the P4 Union at Chennai GPO Delivery hall .

Following were present at the meeting:

A demonstration meeting was held at 15:00 hrs on 17.08.2013 by the staff members of the Union with AIPEU,FNPO and PEPU P3 comrades of Chennai GPO and discussions were shared in favor of AIPEU P4 Union for their massive protest. S.Raghupathy ,ASG, NFPE gave an impressive speech  and discussed about the necessity of strike. Also, Gunasekaran,CS, P4 FNPO and R.Venkataraman, Vice President , AIPEU P3 discussed about the same and took part in the demonstration.

At 18:00 hrs, finally the administration came down and assured that the required changes requested by the P4 Union will be implemented positively if they resume to normal work immediately at once. All the Postmen staff resumed their work .NFPE congratulate the Chennai P-4 Comrades for their Heroic resistance against the implementation of beat changes and also for the great victory. Thanks to the guidance given by the Circle Secretary, AIPEU P3, J.Ramamurthy and Financial Secretary, AIPEU P3, A.Veeramani in leading the four day strike to a glorious victory.

NFPE also thanks Shri. Mervin Alexander, PMG, CCR in bringing the strike to an impressive negotiation.

Thanks
NFPE GPO
Posted by GPO_NFPE at 10:24 No comments:

THE STRUGGLE IS HEADING TOWARDS THE FOURTH DAY AT CHENNAI GPO DELIVERY SECTION.
Posted by GPO_NFPE at 10:40 No comments:

Email ThisBlogThis!Share to TwitterShare to FacebookShare to Pinterest
better late, than never!!
at last department of posts and ministry of communications  admitted that mckensey
model (mnop) l1, l2
is a total failure
orders issued to restore the old position
name remains (l1, L2) but the scheme stands scraped
the stand taken by the jca (nfpe & fnpo)
from the very beginning has been proved right.
it is a victory for our continuous campaign and struggles including the decision for indefinite strike which compelled the department to give an assurance that no rms offices will be closed.
nfpe congratulates the entire postal and rms
employees for this victory.
Now the question to be answered by the authorities are:
1.     Who is responsible for the delay caused to the public mails due to back-routing for the last two years?
2.     Who is responsible for the loss of public faith and trust in the Postal department due to heavy delay caused due to L1, L2 in processing and transmission of public mails?
3.     Who is responsible for paying an amount of more than 100 crores to be Mckensey Consultancy for this anti-people, anti-worker, “Tuglak Model” reforms?
4.     Who are those behind this shady deal with the Mckensy consultancy?  Why are they not taken to task?
M. Krishnan


Secretary General NFPE.
Posted by GPO_NFPE at 07:55 No comments:

MINUTES OF DISCUSSION ON POSTMEN DEMANDS